On June 25, 2014, Reuters reports that China has unveiled a new official map of the country giving greater play to its claims on the South China Sea by making the disputed waters and its numerous islets and reefs more clearly seem like national territory.

Although previous maps published by Beijing included China’s claim to most of the South China Sea, that claim was depicted in a little box in a bottom corner to enable the rest of the country to fit on the map. That placement made the South China Sea’s islands appear more like an appendage rather than an integral part of China.

The new, longer map dispenses with the box, and shows continental China along with its self-declared sea boundary in the South China Sea — stretching right down to the coasts of Malaysia, Vietnam and the Philippines — on one complete map.

An unnamed official with the map’s publishers told the Chinese government’s official newspaper People’s Daily that the new “vertical map of China has important meaning for promoting citizens’ better understanding of … maintaining (our) maritime rights and territorial integrity.” 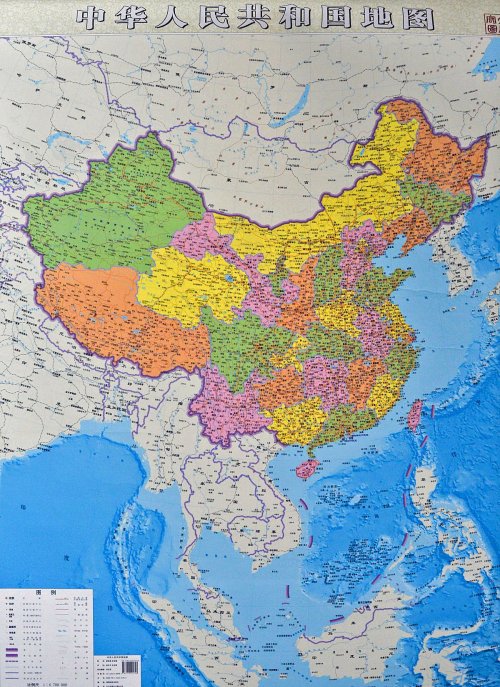 Click map to enlarge. Note the purple dashes marking the South China and East China Seas as parts of China.

Indeed, China’s recent aggressive moves in the South China Sea, as well as last November’s declaration of an Air Defense Identification Zone over the East China Sea, are but indicators of an overall policy shift by the Chinese military from a land-based to an ocean defense strategy.

An article in [Beijing’s Guofang journal] National Defense in 1995 explains that, “In the past, for a long period of time,” humanity primarily relied on land for their survival and development, thinking that “national territory (guotu 国土) only meant dry land.” But in today’s world, due to rapid increases in population and dwindling land and resources, “national territory” must mean more than “land territory” (lingtu 领土) but should include “territorial waters” (linghai 领海). This has led nation-states to turn to the “oceans” (haiyang 海洋) — most of which are still “virgin territory” — in their search for new “living space” (shengchun kongjiang 生存 空间).

Defense of its “national maritime territory” requires Beijing to shift its defense strategy from one of “coastal defense” (jin’an fangyu 近岸防御) to “offshore defense” (jinhai fangyu 近海防御). National Defense maintains that since “the frontline of maritime national defense lies beyond China’s territorial waters . . . there will be times” when China’s defense of its seas “may require doing battle in farther maritime regions” including “international waters and seabeds.” China’s perimeter of “offshore defense” is conceived to include two “island chains.” The first chain stretches from the Aleutians to the Kurils, the Japanese archipelago, the Ryukyus, Taiwan, the Philippine archipelago, and the Greater Sunda Islands. The “second island chain” comprises the Bonins, the Marianas, Guam, and the Palau archipelago.